Ok. Not technically at this moment, but just a few weeks ago. It was amazing! But, during that trip, I had a lot of fear.  Fear that the trip wouldn’t go well…fear that I’d mess up an important opportunity…. fear that I’d get lost in that big ‘ol city… and the list goes on.

Which is exactly why I chose “Fear” as the topic of this week’s video. As I was standing on the oldest and longest suspended walkway 10 feet above rushing cars over the East River, all I could think about was, where would I be if I allowed fear to dictate my life?

You see, this one word has more power than we realize. If we aren’t careful, our lives will pass us by if we allow fear to root itself in our minds. We can miss out on our greatest dreams because fear will stop us dead in our tracks and tell us we aren’t good enough to do it.

So, head on over to the video, and let me know what you think. Are you going to let fear boss you around? Or, are you going to take risks and fight for your dreams in life? 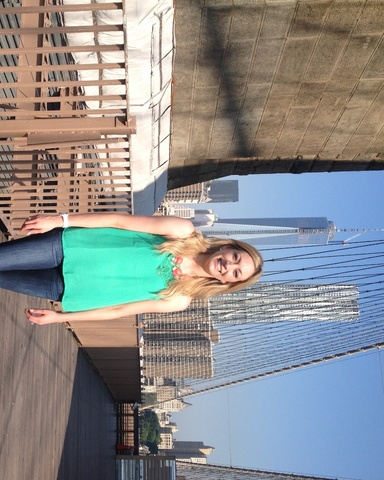 Shannon Oleen is widely recognized as a leading authority in finding passion, creating positive change and reaching personal goals. A former NFL Cheerleader, Pryor Leadership Fellow, and 4-H State Council Alumna, she has entertained and educated audiences around the world, receiving several accolades and awards throughout her career. The Kansas City native relates how hard work, the right attitude and passion really will lead you to achieving your dreams.  Shannon’s enthusiasm combined with her inspirational message is a compelling call to action for people who are ready to conquer their dreams, too.