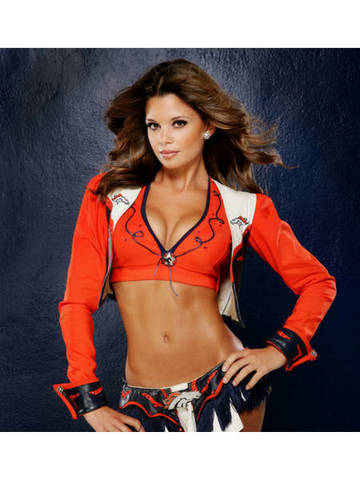 62 semifinalists were selected based on Facebook voting, with over 11,000 votes registering in less than five days. A panel of celebrity judges narrowed selections to 32 finalists, who submitted videos about why they should be the next face of the AKD brand.

After much anticipation, Angela King Designs announced Toni Damico as the 2012 Sports Model Search Winner and new face of AKD and Go Wild! Wear. Toni graduated from the University of Minnesota before relocating to Denver in 2011.

"It was a tough decision, and it came right down to the wire! The judges - our entertainment industry pros - reviewed applications, photos and videos VERY closely to arrive at their selection. We congratulate our winner!" said Angela King-Twitero, President, Angela King Designs and Go Wild! Wear.

Toni's finalist video stated, "I would be honored to represent this quality brand. It is so important to feel confident in your uniform, and in my rookie year as a DBC (Denver Broncos Cheerleader), I appreciated the quality, fit and shape the AKD uniforms gave to our entire team."

"The contest for the new face of AKD was both fun to be a part of and impressive to observe. The quantity and quality of the women who entered was in direct correlation to the excellence of the AKD brand," according to one judge Fred Gaudelli, Producer, Sunday Night Football, NBC Sports. "From a costume design perspective, AKD knows the cheerleading and fitness business better than anyone. Listening to the contestants rave about the AKD products made it quite clear what a great reputation AKD has with its constituency. Congratulations to the winner."

ABOUT ANGELA KING DESIGNS
Angela King Designs, Inc. is the premier costume supplier to professional sports cheerleaders in the US and abroad. From NFL, NBA, NHL to professional tennis - AKD costumes the world of professional sports. Go Wild! Wear includes AKD's most popular designs from the last 20 years, worn by the hottest cheer and dance teams. Customers can Go Wild! with an array of audition outfits, rehearsal wear, swimwear, performance costumes, boots and other accessories. Visit www.angelakingdesigns.com and www.gowildwear.com.