"After the Poms" with Liza Macawili - Former LA Rams Cheerleader 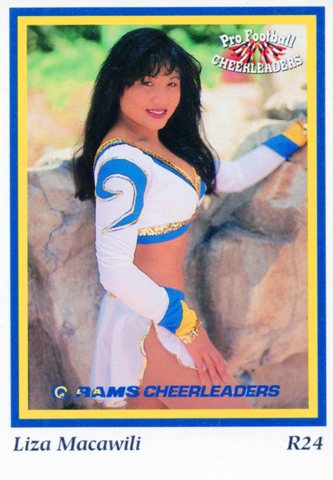 This week’s feature “After the Poms” story is on Alumni Cheerleaders member, Liza Macawili, a former NFL Cheerleader with the LA Rams!  Find out what she’s doing now "After the Poms"!!

Were cheerleading and dancing a part of your life when you were younger?

I started dancing later in life for a professional dancer. I was 12 when I first started ballet but I didn't start really training for dance until I was in my high school dance program at 15.  My sister was on drill team, song & flag in high school so I wanted to follow in her footsteps, and I did both teams. I was on drill team and then on song & flag in my senior year. I went on to dance professionally out of high school. I was fortunate to be able dance locally at the amusement parks, Disney, Knott's Berry Farm and Universal Studios and tour nationally and internationally with A Chorus Line, Sesame Street Live and Disneyfest Asia.

You were a member of the LA Rams Cheerleaders when they were originally in Los Angeles.  Please tell us about your cheerleading experience with the Rams.

I made the team on my first try on my 23rd birthday.  It was an amazing day.  My friends and family had come out to cheer for me because the finals were an open audition at Universal Citywalk. I had no idea what was ahead for me. Being on the team was a lot of work! We practiced 3 times a week in addition to games, promotional and charity events. At the time, we were only paid for games. I had a rough time with the choreography. Rey Lozano was the choreographer and he was tough! My dance training wasn't as solid as many of the girls. I felt like I was always in trouble because I was freaking out at rehearsal. I thought I was going to get kicked off and it meant so much for me to be on the team. I would cry in my car after rehearsals, but I persevered and the choreographer ended up hiring me for his camp, US Spiritleaders. My rookie year, 1994, was the last year they were here. It was hard for a lot of us because we felt like we weren't finished. Some of the girls went to basketball and other teams out of town. After the Rams left, I danced on an Arena Football team,The Anaheim Piranha's, with Rey Lozano.  He would send the girls who were having a tough time to talk to me. I was so happy I was able to help. I will always cherish the memories of cheering for the LA Rams. 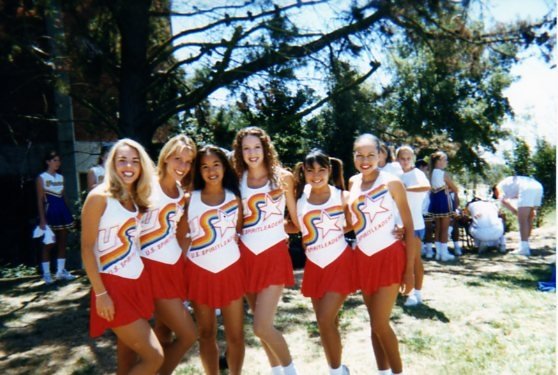 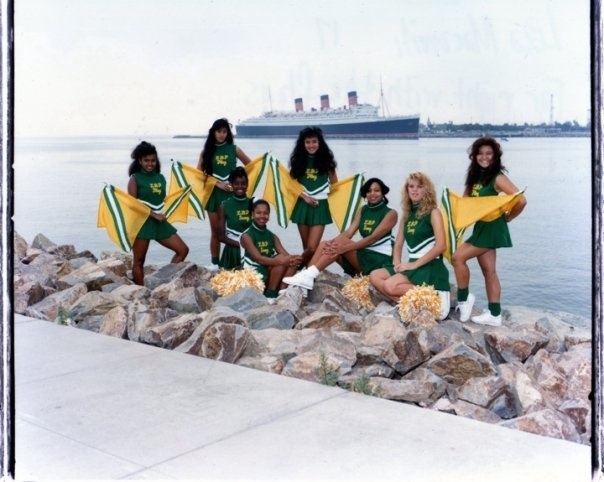 I am so excited to have the LA Rams back!  I remained a fan after they left, and I even traveled to St. Louis for Cheer for a Cure, an alumni event where I danced on the field at The Edward Jones Dome. But having them home is great. I was active in the movement to bring them back home. I went to booster club events and rallys to show that there was still a market in Los Angeles for them to come home to.  My life came full circle this year during the Rams cheerleader tryouts. I was hired by the beauty sponsor to do makeup for the tryouts. And then Keely, the entertainment director, invited the alumni on stage to help introduce the new squad. What an amazing night. I hope to make it to a few of the games. 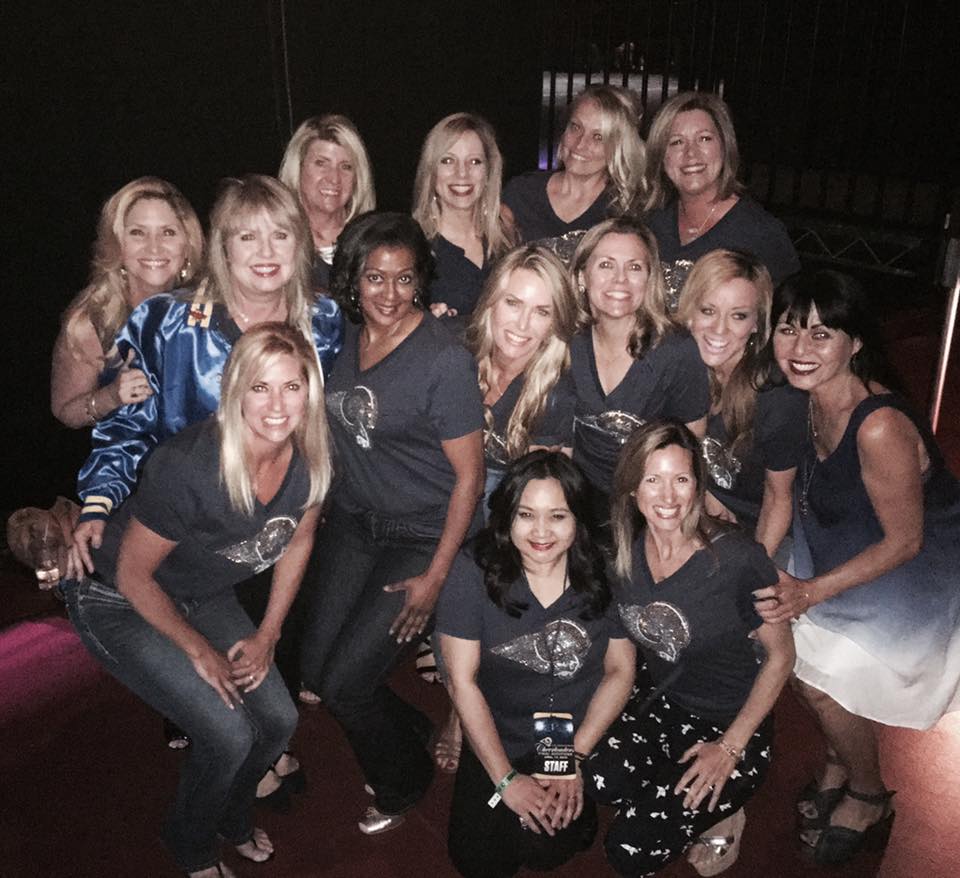 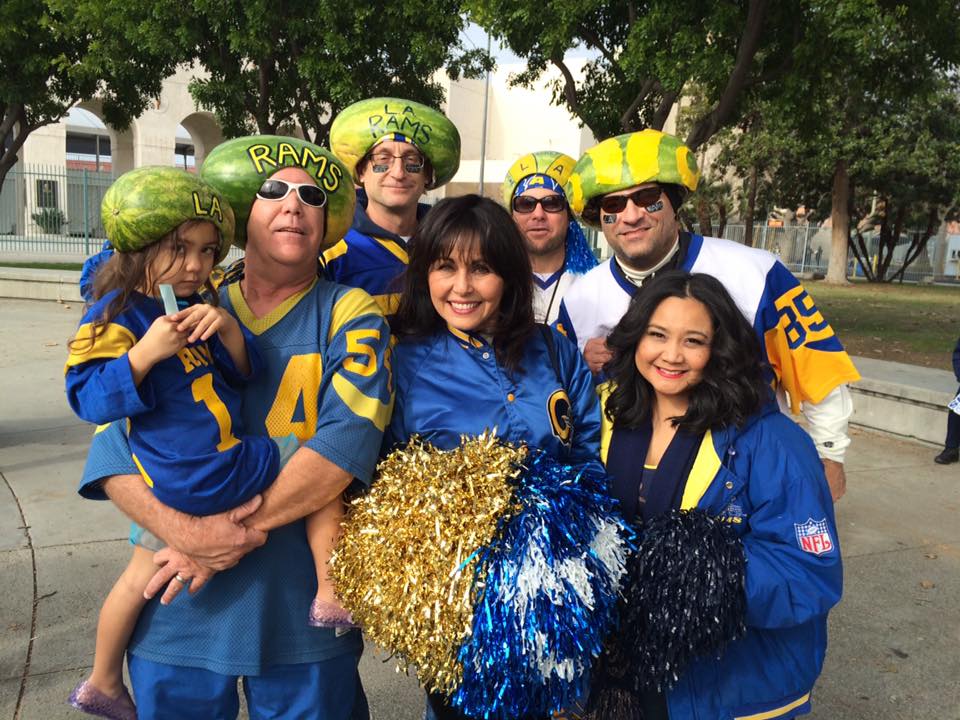 What your most memorable moments as a cheerleader?

I had so many memorable moments as a cheerleader, from cheering for my high school, Long Beach Poly, with my best friends on the field with me, to auditioning for the Rams and having my friends and family rooting me on, to dancing at the games. I can't really pinpoint any one particular time. I do remember the time I attended a luncheon with the football players. That was insane! I had never seen so many huge men in my life all in the same place. The cheerleaders had to escort the team players to their tables. I remember the player I escorted was D'marco Farr. It was exciting to watch his career blossom through the years. I also worked on the movie "Forget Paris" as a basketball cheerleader for the Knicks and Utah Jazz, and did promos for the Anaheim Ducks and the San Diego Padres.  There were so many good times. 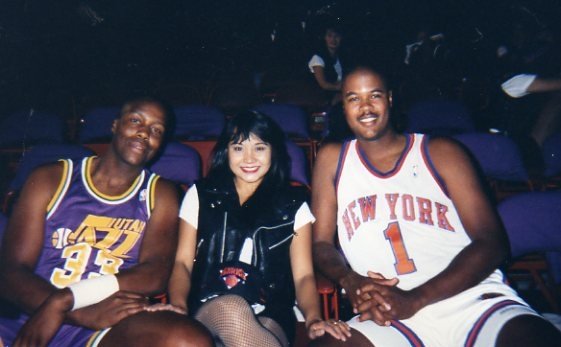 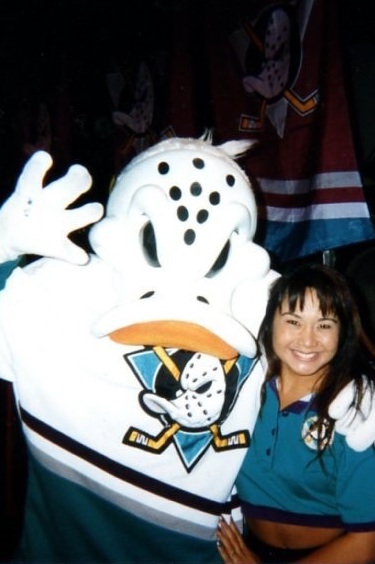 What advice would you give to a current or future cheerleader/dancer?

Future professional cheerleaders/dancers should get some good, solid training in dance and learn to pick up choreography quickly! There are so many workshops out there right now. And usually, the teams holding the auditions conduct workshops to learn their style of choreography. I highly recommend going to these workshops! I went to one for the Rams and they used some of the choreography we learned for the audition routine! Learn the look of the team. All teams have a type of look they like. Some teams are more glamorous and some teams like the girl next door look.

If you don't make the team the first time, go back and try again. I know a cheerleader who tried out several times for multiple teams and didn't make it and worked so hard she not only made the team but became captain!

Tell us what you are doing now and what you do in your spare time.

I currently work as a makeup artist in the beauty, fashion and entertainment industry in Los Angeles. I'm married to a personal trainer who was a former professional athlete also so it is sports all the time in this household. We are caregivers to my parents but when we have spare time, we go hiking and hang out with friends. I also love boxing and yoga because it's great stress relief. I'm also still active with the former cheerleaders and attend charity events and booster club functions when the time permits. 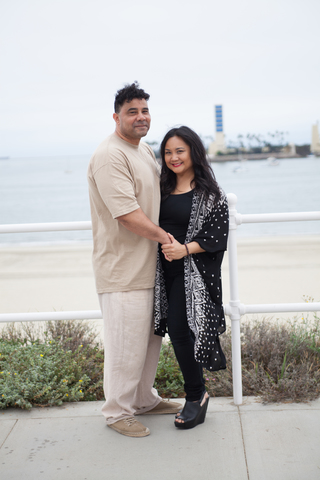 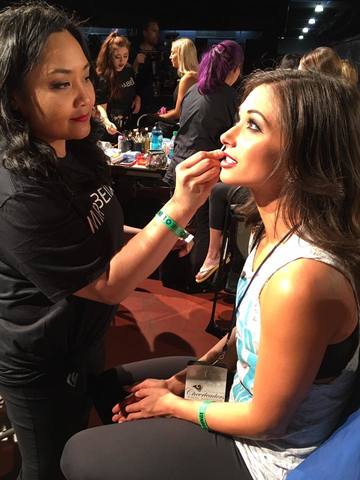 It's so hard to pick just one place. I loved Singapore. In America I loved the mountains in Aspen, Colorado and Asheville, North Carolina. Portland, Maine is such a cute city. And in California the beaches in Laguna and San Diego are so beautiful. And I love the freedom in Amsterdam.

Movie: I have a few favorite movies.  Gladiator, Kung Fu Hustle, Curse of the Golden Flower, Ran, The Matrix.  I love a good fight movie mixed with a sordid story.

Thank you so much Liza for your time and interview with Alumni Cheerleaders! Cheers to you and enhancing beauty!! www.lizamakeup.com