After the Poms with Bari Yonkers - Former Arizona Cardinals Cheerleader!

Alumni Cheerleaders is excited to have one of our members, Bari Yonkers, for this week's feature story!  This talented young lady is a former Arizona Cardinals Cheerleaders!!  She has a great story to share with us from entertaining troops overseas as a cheerleader to now being on the other side in the military. 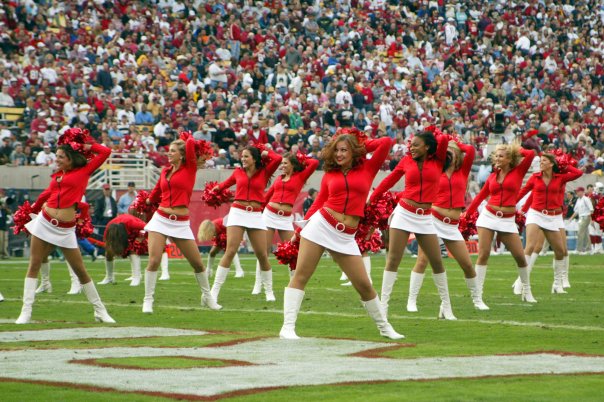 Tell our readers a little bit about yourself and where you are from.

I'm originally from Nebraska, but pretty much grew up in Arizona from the age of 11.

Were cheerleading and dancing a part of your life when you were younger and how did you get involved?

I started cheerleading in the 5th grade while living in Centralia, IL.  We were the "Tigers" and we cheered for a pop-warner basketball team of sorts.  We then moved to Arizona and I continued on cheering in Jr. High and again in High School.  Competition cheer was a big part of my high school cheerleading days and we competed in Anaheim, CA at Nationals every year.  I didn't get into dancing until my Senior year when I auditioned and made the competition Pom (dance) team.  That's when my interest turned towards the dancing aspect of the cheerleading world.

You are a former professional cheerleader for the Arizona Cardinals.  Please tell us about the team (s) and what year(s) you cheered.

I cheered for the AZ Cardinals in 2000 and again from 2003-2006.  In 2002 I took a short break to be a part of the "Cheerleaders of America" team and that's when I got my first taste at troop entertainment.  We hit 19 countries during three different Armed Forces Entertainment tours that year.   I also danced for the Inland Empire 66ers Minor League Baseball team during the 2003, 2004 seasons. 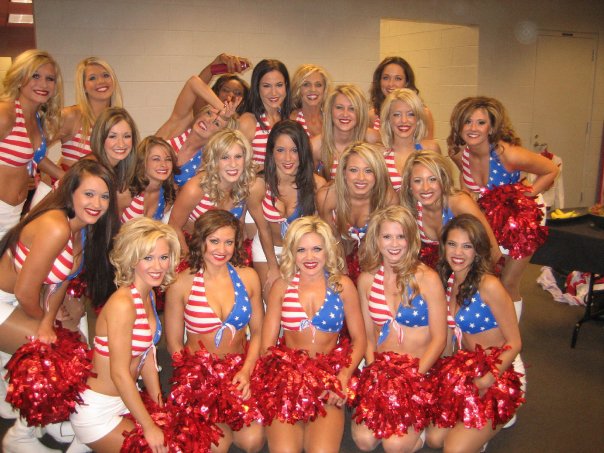 What is one or several of your most memorable moments as cheerleader?

Oh boy, I'm sure there are a ton but some off of the top of my head would have to be spending time at an orphanage in Honduras in 2002 while touring with the Cheerleaders of America team, performing in Fallujah, Iraq in 2005 for about 300 U.S. Marines during an AZ Cardinals Cheerleader troop entertainment tour and walking into head coach Dennis Greene's office after practice one night requesting an autograph on an old "Mean Joe Greene" t-shirt my mom had given me.  He was a little taken aback when I walked right up to his office and said "How'd you get in here?"  I then explained I was a cheerleader and we had just finished practice.  After I told him that he was very nice and probably thankful I wasn't a stalker fan who broke into the facility! 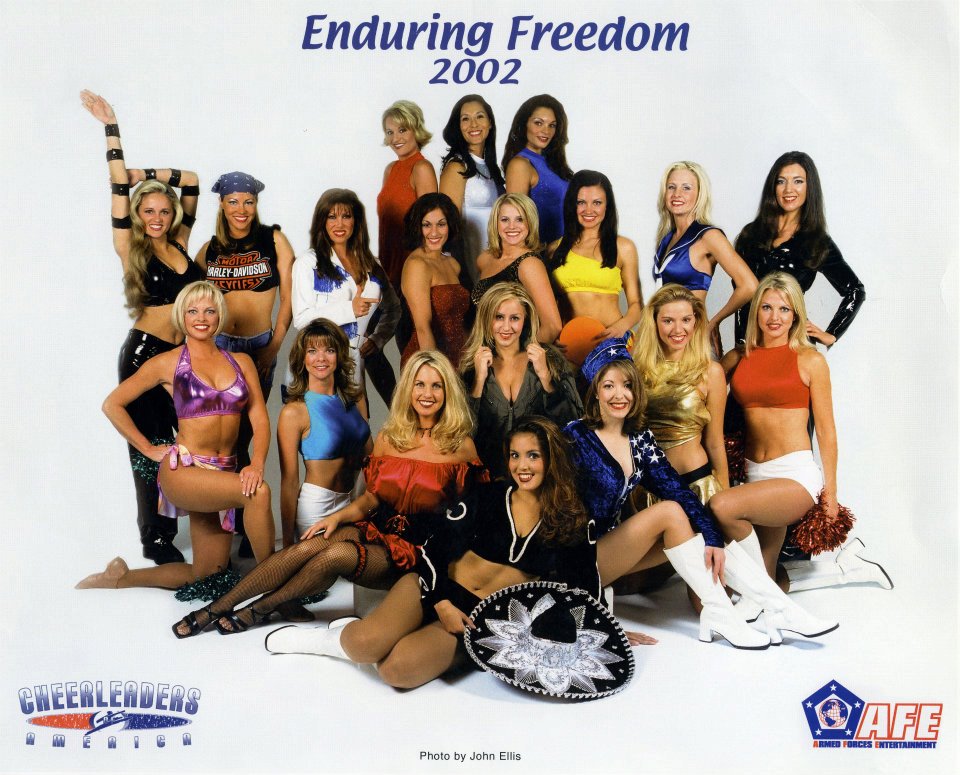 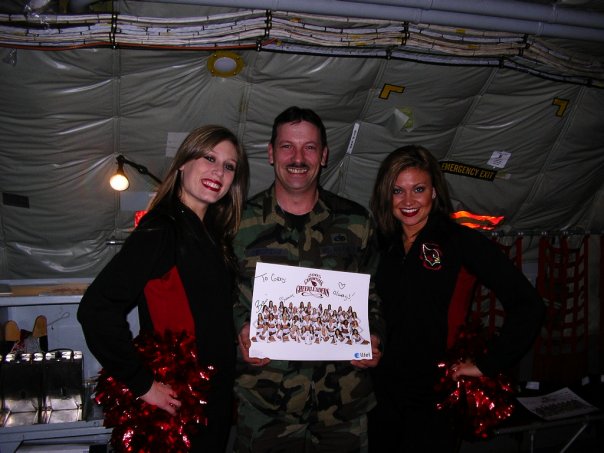 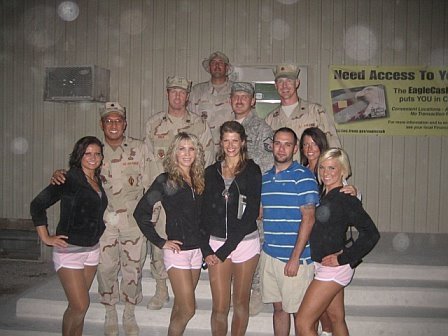 We understand that you are one of the co-founders for the non-profit organization "Sweethearts for Soldiers".  Please tell us about this organization and how we can help to contribute to a great cause.

Yes, I co-founded the Sweethearts for Soldiers 501(c)(3) organization in 2006.  However, we have recently dissolved and donated our remaining funds to Operation Gratitude and the Operation Homefront (AZ chapter) organizations.  While my organization is no longer operating, I would encourage everyone to seek out a charity that hits close to their heart and donate their time, money or resources.  Even a little bit goes a long way and my organization was always grateful for what our volunteers and donors provided. 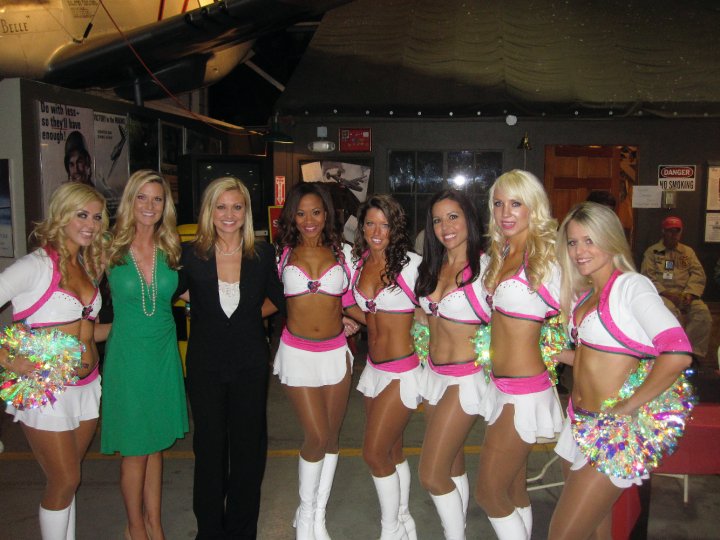 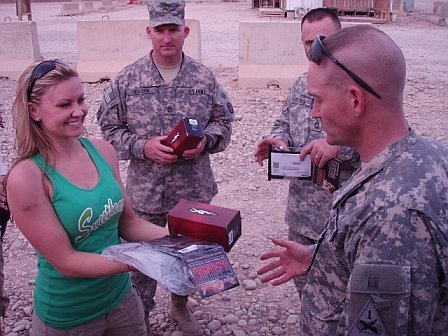 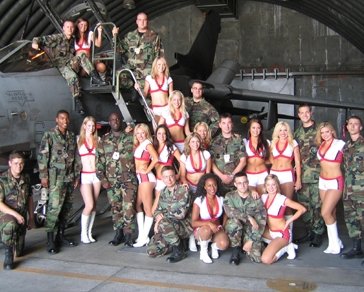 I was recently involved with the Boot Campaign's largest annual event, the "Boot Ride and Rally."  This non-profit has a very unique way of getting celebrities, coaches, etc. to show their support...by lacing up a pair of combat boots for the troops!  Through this promotion of patriotism, the Boot Campaign and their advocates are raising awareness for important veteran issues.  The Boot Campaign is great because they help wounded military and their families with job placement, mortgage free homes, PTSD counseling, adaptive clothing and so much more. 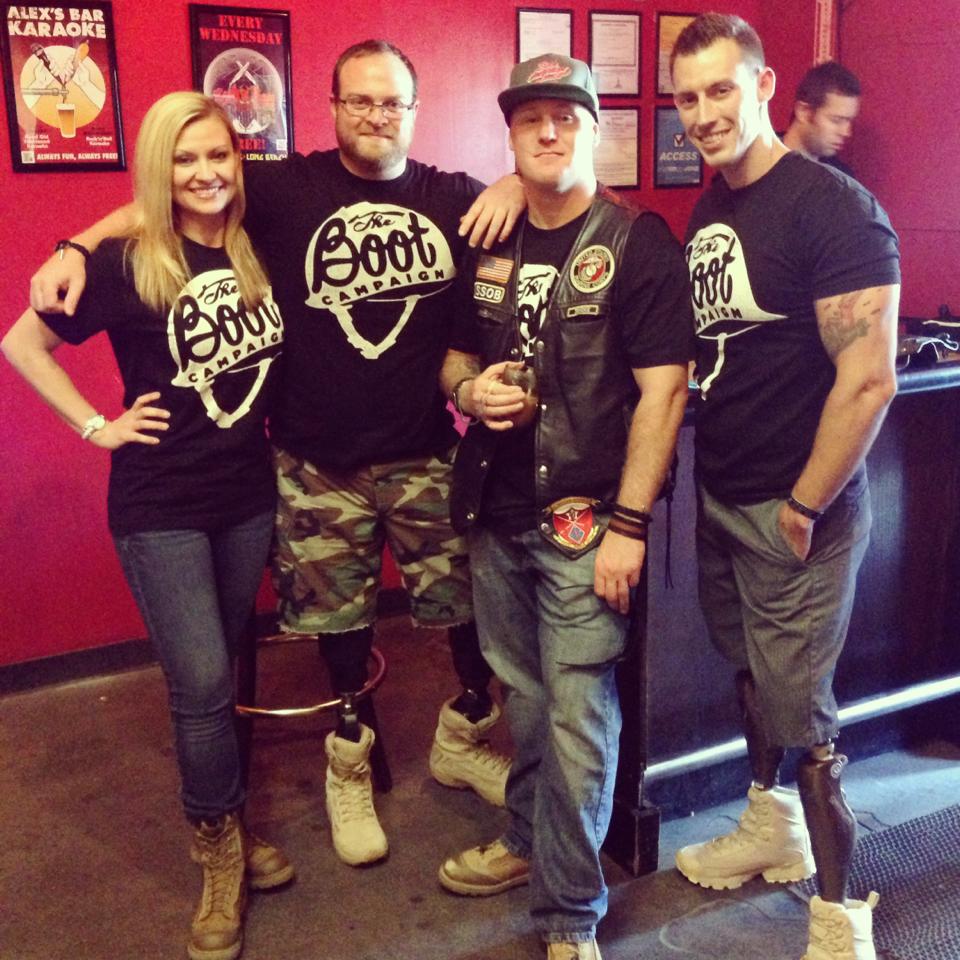 I was honored to have been chosen as a Hero Representative for their event and will forever be a supporter of this wonderful organization. http://www.bootcampaign.com/about/

What advice would you give to a current or future cheerleader?

Someone will undoubtedly help you along the way, make sure at some point you pay it forward.  This is true in life as well, not just cheerleading.

What are you are doing now and "After the Poms"?  We understand you recently joined the armed forces.  Please tell us which branch and share your experience being in the military.

Yes Ma'am!  In May I was Commissioned as a 2nd Lieutenant in the United States Air Force Reserve.  Joining the military has been a goal of mine since I came back from my first Armed Forces Entertainment tour in 2002.  Having gotten the chance to see what our men and woman do while deployed and at bases overseas,  allowed me to get a glimpse into the military lifestyle and truly appreciate their sacrifice.  Ever since then I knew I wanted to be a part of that cause, to be a part of something bigger than myself and step up and make that commitment to our country.  My fiancé is a Marine so I'm sure you can imagine, we get the "that must be an interesting household," a lot.   Let's just say we poke fun at each other...but it's all in good fun. 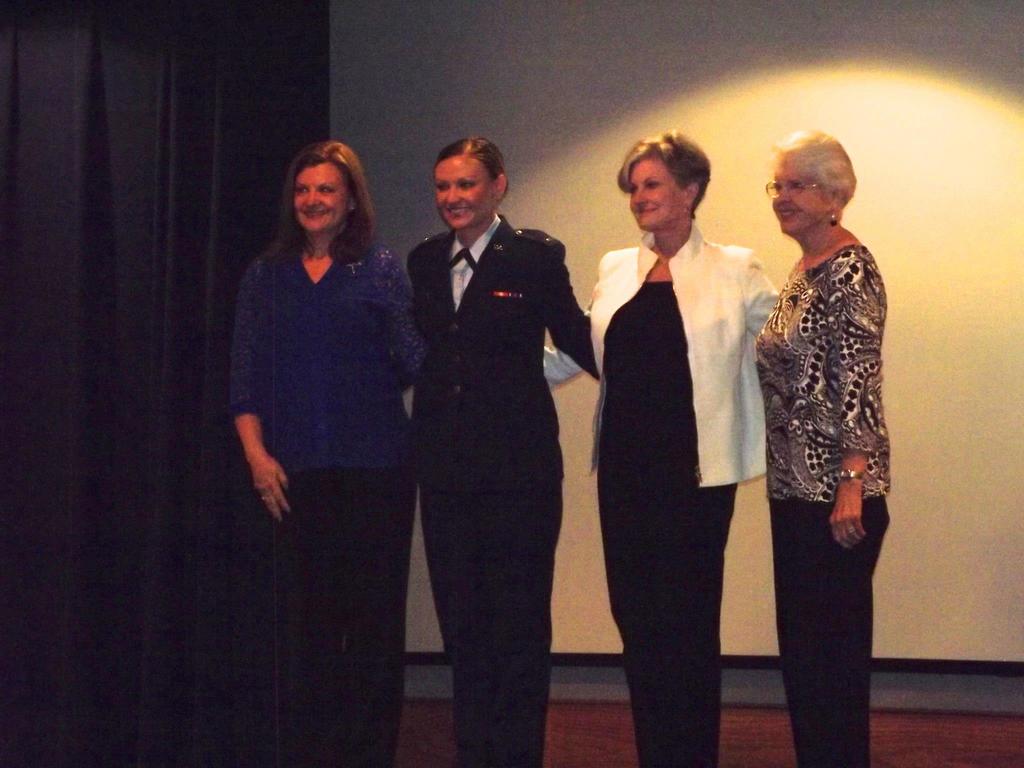 My experience thus far has been outstanding! I work in Public Affairs and love every minute of it.  A lot of what I do is work to build relationships within the community and bring awareness to military issues.  Additionally, I have been tasked with re-establishing the relationship between my base, March Air Reserve Base, and Hollywood.  Bob Hope did his first ever troop entertainment tour here back in the 40's and we have a lot of history here.  When celebrities come out to the base it's my job to make sure things run smoothly and to look for opportunities for our Airmen to get involved. 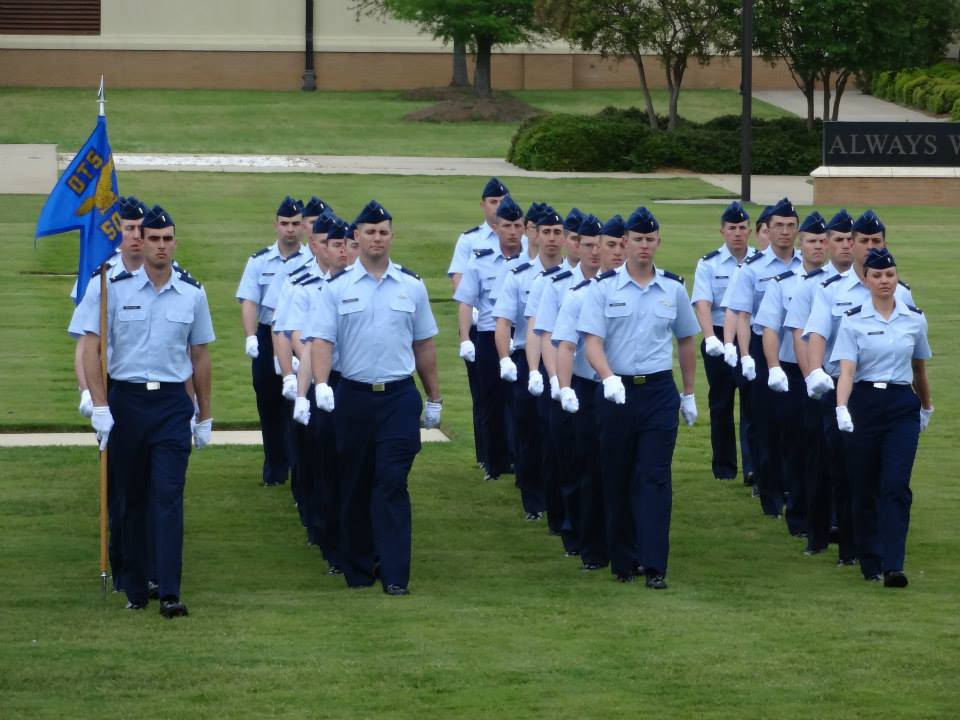 Last month a handful of us went out to Tito Ortiz's gym in Huntington Beach, CA and got a private training session with him via the Pro VS GI Joe organization.  We've had Josh Burkman from the World Series of Fighting come out for a meet and greet and also the NBA Cares Hoops for Troops program, with former NBA star Norm Nixon and WNBA star Ruthie Bolton, put on a clinic for 80 of the March ARB dependents.  The Charger Girls also shot part of their calendar at our March Field Museum which is just outside the base.  I got to go to their calendar release party and the shots were absolutely stunning!

Public Affairs is exactly where I need to be.  I truly enjoy networking and utilizing my contacts for the betterment of the Airmen here and of the military.

Travel destination: Anywhere abroad... the world is a fascinating place!

Book: I don't have a favorite, but I love books by Stephen King.

Movie: Without a doubt, Top Gun

Quote:  "Believe you can and you're halfway there." -Theodore Roosevelt

Thank you so much Bari for your time and interview with Alumni Cheerleaders!  Cheers to continued success!  We also thank you for your service to honor and protect our country.